Following four days of straight talking on race in Britain by US civil rights veteran Jesse Jackson, the nation's Churches are to hold a major event at a Brixton church to encourage black youngsters to opt for higher education.

The event follows Jesse Jackson's visit to London and Oxford this week (11-14 November), during which the former US presidential candidate delivered an uncompromising message about the state of racism and freedom today in both the US and Britain.

"The abolition of the slave trade gave us freedom but it didn't give us equality. Today, two centuries after abolition, black people in Britain are still not equal."

That was what Mr Jackson told audiences in Britain this week during a visit organised by the racial justice team of Churches Together to highlight the continuing commitment and work of British and Irish Churches to racial justice.

In a series of meetings with church leaders and racial justice activists in London, Mr Jackson emphasised the lack of opportunity black young people have today compared to their white counterparts. Black people, he asserted, "work harder for less, travel further to work, live under stress and don't live as long."

Citing other American results of racism, Jesse Jackson pointed out that in every US state, the number of black young people in jail exceeds the number of black students in college. He added that ingrained racism in the US also ensures that while most white drug users go into rehab, black drug users normally go to jail. He further pointed out that the current crisis in the American sub-prime mortgage market disproportionately affects black people, and warned that this is "a tsunami heading Britain's way." He called on the Churches to go beyond their traditional focus on social service, and to stress the need for radical social change.

To emphasise the central importance of education in addressing racism, Mr Jackson travelled to Oxford, where CTBI is in partnership with Regent's Park College in an ASPIRE initiative.

ASPIRE seeks to increase the access of British black young people to centres of higher education, where they are underrepresented. At the project's launch in the Regent's Park College chapel, Mr Jackson pointed out that while hard work and excellence matter, inheritance and access matter more. Addressing some of those few black students who had succeeded in entering the University of Oxford, he reminded them of three responsibilities: "To succeed and not to let down those who fought to help you get here; not to look down on those who don't succeed as you do; and, as you rise, to lift others with you."

Under the auspices of the ASPIRE initiative, Churches Together in Britain and Ireland, Regent's Park College and their fellow-partner in the project, Canterbury Christ Church University, are to hold a major public event for black young people on Sunday 25th November at the popular Ruach Church in Brixton, South London. The gathering will encourage black young people to aspire to greater achievement in higher education. Andy Bruce, leader of the CTBI racial justice team, said, "One of the key ways of reaching Britain's young black population is through the churches. We intend to present to black youngsters in Britain the reality that the highest quality university education should be as much for them as anyone else. Black undergraduates will talk about what it means to be at a university like Oxford, and my hope is that many will be inspired to apply for admission to Britain top universities. For their part, Britains churches must give such young students all the support they will need. It is CTBI's aim to help channel that support to those who aspire to reach the pinnacles of knowledge and learning."

Some high res. photographs are available upon request. 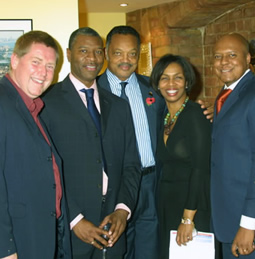