31 ‘Simon, Simon, listen! Satan has demanded to sift all of you like wheat, 32but I have prayed for you that your own faith may not fail; and you, when once you have turned back, strengthen your brothers.' 33And he said to him, ‘Lord, I am ready to go with you to prison and to death!' 34Jesus said, ‘I tell you, Peter, the cock will not crow this day, until you have denied three times that you know me.'

Then they seized him and led him away, bringing him into the high priest's house. But Peter was following at a distance. 55When they had kindled a fire in the middle of the courtyard and sat down together, Peter sat among them. 56Then a servant-girl, seeing him in the firelight, stared at him and said, ‘This man also was with him.' 57But he denied it, saying, ‘Woman, I do not know him.' 58A little later someone else, on seeing him, said, ‘You also are one of them.' But Peter said, ‘Man, I am not!' 59Then about an hour later yet another kept insisting, ‘Surely this man also was with him; for he is a Galilean.' 60But Peter said, ‘Man, I do not know what you are talking about!' At that moment, while he was still speaking, the cock crowed. 61The Lord turned and looked at Peter. Then Peter remembered the word of the Lord, how he had said to him, ‘Before the cock crows today, you will deny me three times.' 62And he went out and wept bitterly.

"Have mercy, Lord, on me, regard my bitter weeping, look at me, heart and eyes both weep to Thee bitterly."

These words are taken from the St. Matthew Passion by Johann Sebastian Bach. They are sung as the comment of the Church to the denials of Peter as Jesus was being questioned by the High Priest. Some have described this section of Bach's masterpiece as the most heart-wrenching.

Peter is a believable character. Like so many of us he is quick to offer a response, but often speaks without thinking. He is sincere in what he says but does not always follow through with action. "He talks a good game" could well have been said of Peter!

There are many different texts we could have chosen for this week. Like J S Bach we might have chosen Matthew's Gospel. Or we could have opted for the passage in John's Gospel, traditionally read on Good Friday. Instead, however, we have selected the less well known account of Peter's denials in the Gospel of Luke. As with the other Gospels, Peter follows at a distance - always on the edge of His pain. But in Luke, Jesus turns and looks at Peter after he has denied his Lord for the third time.

Despite being on the edge of Jesus' pain, Peter is not unnoticed. Being on the edge does not equate with invisibility. Luke's telling of the passion story reminds us of this. In Luke, Jesus looks at Peter and reminds him of how he falls short of his own words of enthusiastic loyalty and faith.

I am Peter the Rock.
I am looking over to the cross.
It feels as if I am slumped in rushing water. The stones of His stories are lying about us, beneath the surface, one touching another.
My world is melting, dissolving in front of me.
Stories of the night before - being taken to the garden after the last supper. Exhausted, frightened. I was holding the group together, it was tough! I followed, scouting around to see what was happening.
"Feed my sheep." He said it again and again.
"Do you love me, do you love me? Feed my sheep."
When they took him we all stood back.
So many soldiers.
You know how you feel when you get a panic attack - buzzing in the ears, breathless. I was sick.
His Rock he called me... and he said I would betray him three times.

Let me tell you about that:
Three serving girls - nobodies.
Why should I say yes to them? I was doing better by telling them to get lost.
So... a question... Why do I always have to be strong?.. Would anyone else have replied differently?
Can't I be vulnerable...
Can I tell you about earlier -
Hitting I can cope with... but spitting on Jesus the Lord... it makes me cry
Is that weakness?
I am Peter the Rock. What will I do without him?.. He was everything to me...

In a quiet moment the Lord said "Love is still love, Peter. It takes different forms, that's all. When someone dies you can't see them smile or bring them flowers, or tousle their hair. But when one sense weakens another is heightened. Memory becomes your partner and you nurture it. Life ends but love doesn't."

It seems funny to think of that now...
Am I not just the same as you? And yet you judge me for denying the Lord.
When do you deny God and I do not..? When are you weak and I am not..?
Here at the cross I am broken, I am Peter a shattered rock.
I can only offer my weakness... 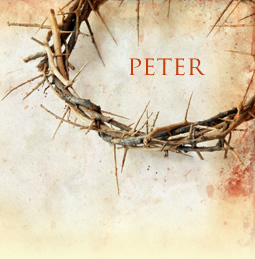