Campaign to save Refugee and Migrant Justice fails

Legal charity Refugee and Migrant Justice went into administration on 16 June 2010, victim to the new Ministry of Justice contract regulations of 'fixed fee' representation with payments only made on completion of a case.

A campaign to save the legal charity which attracted over £76,000 in donations within 24 hours, and support from the Archbishop of Canterbury, senior legal and human rights experts, and organisations such as Amnesty International, Liberty, Mind and Barnado's, failed after talks with the Legal Services Commission, RMJ's main funder, were unsuccessful.

Unlike other types of legal work, in many asylum cases procedures can continue for up to five years or more. RMJ, representing some 13,000 asylum seekers, found itself with outstanding LSC fees amounting to £1.8M and a firm refusal to provide bridging finance.

Many clients have to find new lawyers. Many lawyers cannot take over such cases until the current LSC contract negotiations for solicitors are finalised, sometime around the end August/September. Since RMJ did a great deal of time consuming and difficult detention work, many long term detainees are currently unrepresented and at immediate risk of removal by the Home Office without due legal procedure.

Chaos has resulted, much of it witnessed by CRN members throughout Britain.


Back to Churches' Refugee Network >> 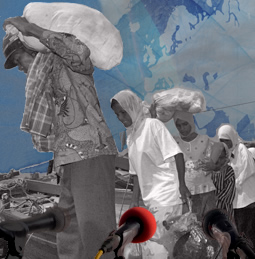