Churches Together in Britain and Ireland (CTBI) has responded positively to a speech by The Rt Hon. John Denham MP, Secretary of State for Communities and Local Government, to the Churches' Inter Religious Network. This CTBI network is the principal ecumenical forum through which the Churches can come together to reflect upon and act together in matters relating to inter faith relations.

The Revd Bob Fyffe, CTBI general secretary, commented on the event, "It was good to hear the Secretary of State, who declared himself to be a secular humanist, saying that secular humanism is not opposed to faith. It was also encouraging to hear a senior government minister stress that the values of Christianity underlie many current British values."

Mr Denham made his remarks before an audience of Christians, Hindus, Jains, Jews, Muslims and Sikhs, at Methodist Church House in London on 19 October.

In his speech, the minister dealt with the relationship between government and faith, and how the two had worked together in the past, did so today, and should continue to do so in the future.

Mr Denham said, "First and foremost, faith must be respected and its power acknowledged by government."

"Some may hear this comment as a rebuke to those secularists who ridicule faith and people who have it," said Bob Fyffe. "It was also good to hear the minister say that he did not believe there was a secular conspiracy to marginalise religion, and that his government believed Christianity still played a distinct role in national life, and that faith groups of various religions had enriched our society."

Fyffe continued, "It may still be true that the government does not 'do God', but now we know that government at least respects those who do 'do God', and wishes to listen to what they have to say, and work with them in order to build a more just society." 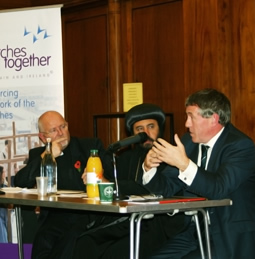