International conflicts, terrorism, claims on Jerusalem, anti-Muslim prejudice, the treatment of Christian minorities in Muslim countries and local community relations all have controversy attached to them.

There is much that Christians and Muslims share and also much which divides them.

A good deal of careful work is being undertaken in an attempt to improve understanding between Christians and Muslims both in Britain and Ireland, and throughout the world. There are a variety of ways in which the Churches are taking this task forward:

The Christian-Muslim Forum for England

was set up following the 'Archbishop of Canterbury's Listening Initiative in Christian Muslim Relations'. The final report of the planning group can be read via the Christian-Muslim Forum's website (PDF )

The Forum itself offers a range of opportunities including conferences and written resources.

In Ireland, the National Consultative Committee on Racism and Interculturalism produced the document The Muslim Community in Ireland: Challenging some of the myths and misinformation.

has produced two documents - "Christians and Muslims: Praying Together" and "Meeting Muslims".

offers "a digest of information from English speaking newspapers and broadcast services in the main countries or areas where Anglicans and Muslims regularly encounter one another".

The letter A Common Word is an important contribution to Christian-Muslim relations and dialogue:
A Common Word

In January 2002, leaders from Judaism, Christianity and Islam signed an historic declaration, committing themselves to working for a just and lasting peace between Israelis and Palestinians. 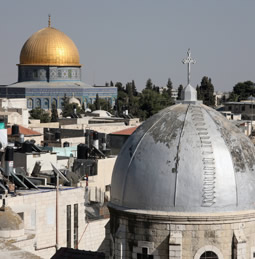