The letter "A Common Word" has generated a range of different initiatives.

As well as the initial responses to the letter there have been a number of different initiatives that aim to develop the conversation with Islam on the themes within the letter and to develop the ongoing Christian theological thinking in respect of Christian Muslim relations.

In this regard there are processes underway from:

• The Vatican
• Lambeth Palace
• The World Council of Churches

In addition some academic institutions are also engaged in their own initiatives, including

• Yale Centre for Faith and Culture

A Common Word: Muslims and Christians on Loving God and Neighbour

Meanwhile, Churches Together in Britain and Ireland has produced a resource on A Common Word which aims to compliment other initiatives currently underway. 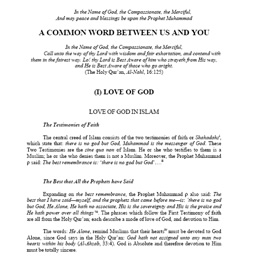