In January 2002 leaders from Judaism, Christianity and Islam signed an historic declaration, committing themselves to working for a just and lasting peace between Israelis and Palestinians.

The declaration was set against the background of disappointments around the lack of progress on the Oslo Accords and was an attempt to engage the religious leadership of Israel and Palestine in moves towards peace.

The Conference at which this declaration was signed was chaired by the then Archbishop of Canterbury, Dr George Carey and was co-hosted by the Grand Imam of Al-Azhar, Dr Mohamed Sayed Tantawy.

This declaration was one of the first initiatives to bring together Christians, Jews and Muslims in pursuit of peace in the region.

The text of the declaration is for download:
Alexandria Declaration (PDF).

A more detailed background to the declaration:

Permanent Committee for the Implementation of the Alexandra Declaration (PCIAD) 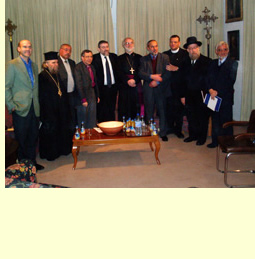