8 Soon afterwards he went on through cities and villages, proclaiming and bringing the good news of the kingdom of God. The twelve were with him, 2 as well as some women who had been cured of evil spirits and infirmities: Mary, called Magdalene, from whom seven demons had gone out, 3 and Joanna, the wife of Herod's steward Chuza, and Susanna, and many others, who provided for them out of their resources.

33 When it was noon, darkness came over the whole land until three in the afternoon. 34 At three o'clock Jesus cried out with a loud voice, ‘Eloi, Eloi, lema sabachthani?' which means, ‘My God, my God, why have you forsaken me?' 35 When some of the bystanders heard it, they said, ‘Listen, he is calling for Elijah.' 36 And someone ran, filled a sponge with sour wine, put it on a stick, and gave it to him to drink, saying, ‘Wait, let us see whether Elijah will come to take him down.' 37 Then Jesus gave a loud cry and breathed his last. 38 And the curtain of the temple was torn in two, from top to bottom. 39 Now when the centurion, who stood facing him, saw that in this way he breathed his last, he said, ‘Truly this man was God's Son!' 40 There were also women looking on from a distance; among them were Mary Magdalene, and Mary the mother of James the younger and of Joses, and Salome. 41 These used to follow him and provided for him when he was in Galilee; and there were many other women who had come up with him to Jerusalem.

42 When evening had come, and since it was the day of Preparation, that is, the day before the sabbath, 43 Joseph of Arimathea, a respected member of the council, who was also himself waiting expectantly for the kingdom of God, went boldly to Pilate and asked for the body of Jesus. 44 Then Pilate wondered if he were already dead; and summoning the centurion, he asked him whether he had been dead for some time. 45 When he learned from the centurion that he was dead, he granted the body to Joseph. 46 Then Joseph bought a linen cloth, and taking down the body, wrapped it in the linen cloth, and laid it in a tomb that had been hewn out of the rock. He then rolled a stone against the door of the tomb. 47 Mary Magdalene and Mary the mother of Joses saw where the body was laid.

Of all the people ‘on the edge of His pain' we will consider, Mary Magdalene always seems ‘on the edge' - few mentions in the scriptures and often at the tail end of a story. She is a figure shrouded in legend and mystery. Many (including some of those who have translated scripture into English) assume that Mary Magdalene was a prostitute although there is no evidence to suggest this. More controversially there is the view that there was a more romantic relationship between Jesus and Mary. This idea is older than we think - it goes back to the 2nd and 3rd centuries where it is mooted in some of the so-called Gnostic Scriptures.

In contrast to this, the Eastern Orthodox tradition has maintained that Mary lived a moral virtuous life throughout. There is even a tradition that Mary Magdalene's chastity led Satan to think that she might be the woman whom God would choose to give birth to Jesus.

In recent years some feminist writers have claimed that Mary Magdalene went on to become a major leader in the early church.

Yet, interesting as this may be, we can see in her someone who responds to Jesus in faith - such that, come Easter Sunday, she is propelled to the centre of the stage as a central witness.

I felt a whole person in his presence. Just being in his company made me feel part of life, made me feel whole... again. I know what you're thinking, lots of people did. But it wasn't like that. He touched my soul, made me feel... I mattered.

No-one had done that before.

When he talked to all of us together, it was as if he was only speaking to me. My tongue often stuck to the roof of my mouth. My heart skipped... I loved him so much...

I know the others did too, but somehow I always felt special. It was so different from the rest of my experiences. Normally I would walk in the market and have to endure the looks and the comments, like many women do... the lewd shouts across the street, the young single woman making her way to this new master. "Oh yes," they would call, "let me be your master!"

They don't understand that love takes many shapes and forms. Just being in his company, just being around with him, it made me feel complete... and so at peace with myself.

I would have followed him to the ends of the world, and in some ways I did. I thought my world had ended, actually. It was the Passover and all the men were in the upper room. Later they went to pray at the Garden of Gethsemane. I knew something bad was going to happen, I just knew.

Late at night someone, I can't remember who, banged on the door and said they had taken the Master prisoner. That's when the nightmare began.

I took Mother Mary and together we stayed on the edge, watching... trying not to be noticed and thrown out by some soldier or official.

So much is a blur now, we were numb with shock... you know when you can't even cry... it was as if I was floating above everything.

It was so quick. The judgement, the terrible torture. I still suffer terrible nightmares... cold sweats, running over and over and over everything that happened. I still can't remember it all.

Mother Mary had fainted... and we got water. She was slumped like a rag doll across my legs, and there was a strange thumping in my head. The next hours were unspeakable... unbearable...

Somehow we ended up at Golgotha... and the abyss...

When the pain goes I think of the Master's face and smile.

I was good because he loved me...

...he didn't love me because I was good.

Loving God
We are good because you love us
Thank you for your gift of unconditional loving
We have been touched by your Spirit
That grounds us in your cross and passion
Renew us with your power
Enfold us in your presence
And bring us finally to see your face. Amen 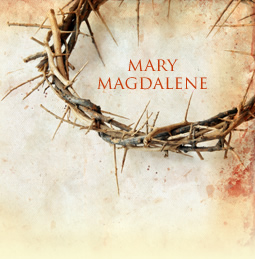