Ending children's immigration detention was the theme of the sixth annual conference of the Churches Refugee Network on 06 June 2010, with 101 people attending.

Psychotherapist Sheila Melzak presented research on the surprisingly long lasting clinical harm immigration detention inflicts cognitively and emotionally. A specially commissioned film on the effects of long term separation on an Armenian family left a deep impression causing tears, and a subsequent offer to raise £1000 - for the visas required for the reunion of the father with his wife and children for the first time in four years. That appeal is now in hand with the help of the North Thames Synod of the URC and Southwark's Anglican Diocese. We welcomed Dr. Evan Harris, former MP for Oxford, with much asylum experience, who outlined the new coalition proposal to abolish such family/child detentions.

Kamena Dorling, one of the Children's Legal Centre's lawyers, Jan Doerfel, a barrister, and Jon Burnett, Medical Justice researcher, contributed to the afternoon workshops. Bishop Michael Scott Joynt of Winchester, whose Diocese contains Haslar detention centre, and who has a Diocesan link with the troubled centre of the Democratic Republic of Congo, was also a conference participant. 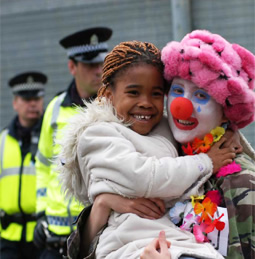