Christian Tradition and the Practice of Justice

If history is written from the need to redefine current comprehension and identity, then this lucid exposition on justice, and the history of its main strands of thought, Christian and secular, addresses a need to reflect on currently received thinking about justice, notably so in theology. We are living with a wide range of inherited views of justice shaped by both Western faith and Western secular philosophy, which are common coinage in the political and civic arena.

Sagovsky writes from a perception that, unexamined, they no longer accommodate new perspectives on human rights, on plural belief systems and on economic disparities in a widening world of rapidly multiplying, changing and profoundly diverse societies. The idea of justice, as shaped by our Western history, is in need of a fresh consideration which re-addresses and integrates the role which faith, as well as secular reason and science have played and are playing in its theory and practice.

Sagovsky, Anglican, and Canon Theologian at Westminster Abbey, traces the development of the various historical strands within the idea of justice. The Greek concept, based on a civic religion of public social practice, is of civic virtue within a constrained view of citizenship as obedience to an immutable social order, its literature depicting the irreconcilable conflicts arising between individual instinctive morality, and such civic duty as is based on a divinely fixed justice... The Roman empire continued such an absolute view of a fixed social order and justice, its origins based on the assigned power from a pantheon of gods beyond human reason or agency. Societal order in such societies are both proof and sign, and their principles of authoritative and sustaining power can be known by the use of human reason.

Roman authors such as Cicero and Aristotle extrapolate a view of justice as ‘The act of justice is to render what is due'. ‘Actus iustitiae est reddere debitum'. In turn it is transmitted to the Church fathers Augustine and Aquinas, who reinterpret it from historical Christian perspectives, incorporating a view of a dynamic and unfolding divine grace and justice replacing the static Graeco-Roman universe and ensuing legal order.

To access the complex and nowadays unfamiliar thought of the Christian Scriptures, he first outlines its roots in the historical Judaic view of justice as based on the Scriptural promise of a God faithful to his elected people, on condition of their exacted faithfulness and repentance, then goes on to show how Jesus Christ, amplified by Paul, reinterpreted the Judaic view of God's omnipotent benevolent justice to apply to all peoples. Justice becomes both a personal entitlement and a personal duty, under the Church's absolute oversight. Each person baptized is called to be part of the body of Christ that is the church, and hence must give and receive justly individually and collectively.

Both Augustine and Aquinas convey a perception of God's justice as being accessible, via a human individual's spiritual transformation, effected through an encounter with Jesus Christ by God's grace. Hence to be faithful entails once again absolute obedience to the empire's replacement, that was the pre-Reformation Church, with its formidable powers as sole agent of the practice of justice through its trained clergy. Aquinas' views add to the pre-existent requirement of assent to law, an obligation to provide for human need. This crucially continues to underlie much influential social teaching of the churches, especially in Roman Catholicism.

Not until the Reformation and political diversification into nation-states is the deep-seated belief in a God-given, unchangeable social order overtaken. Subsequent philosophical and political developments have eroded such a unitary understanding of law and justice as serving a common good, for societies since then became thoroughly ‘uncommon'; fragmented into adversarial groupings with deeply conflicting interests, be they nation, faith, denomination or class...

Sagovsky refashions these histories into four basic strands that go into post Reformation modern views of justice, and in his final chapter argues that the element which can provide the social unity prerequisite for a consensual assent to the law, shattered in modern and postmodern society, is essentially a spiritual one: that of Christian bonds of communion as created by baptism and the Eucharist in any of its diverse denominational forms.

Of these strands of freedom; the rule of law, the meeting of needs and responsible civic action, the first two principles are more readily understood and recognized in present Western understandings of justice especially through the persuasive influence of Kant, which in turn deeply influences subsequent moral and political philosophy and theology using his thought: we are taken with clarity through post Reformation Enlightenment , Descartes, Kant and more recent philosophical traditions on the nature of law, absolute morality, individuality and will. These are juxtaposed for clarification with thought from the English philosophical tradition introducing Utilitarianism beginning with Hobbs, Hume, Mill and Bentham. There is also discussion of the communitarian traditions from which Marxism springs, with its secular, a-personal, often a-religious, even anti-Christian, disregard for the individual in favour of the collective good.

The inability of these strands of political philosophies to reconcile individual and collective rights and needs leads us to Rawls' work on justice; specifically his 1971 Theory of Justice and even more so his subsequent modification and expansion in Political Liberalism (1993). In the latter, Rawls explicitly acknowledges his indebtedness to the moral philosophical aspects of much theology entailing the need to articulate individual human rights.

Rawls' later work insists on a pragmatic, a-religious and value-independent neutrality in respect of underlying belief systems . He posits ‘justice-as-fairness', as 'a precondition of sociality' in our plural societies, and does so via valuable expositions of the nature of the 'overlapping social values' springing from a wide range of divergent personal belief systems. It is, he argues convincingly, this implicit agreed consensus which is required to maintain the fabric of social coherence required to give informed assent to laws that underlie "the practice of justice"...

Sagovsky then argues, drawing on other recent thinkers often influenced by the more communitarian traditions, amongst whom are Amartya Sen and Martha Nussbaum, that in addition to freedom and the rule of law, the meeting of (certain, analysed and listed) needs is a prerequisite for human flourishing, as is the deployment of human 'capabilities' in full participatory citizenship.

From this, and from Christian teaching, he extrapolates that 'responsible action' is the fourth requisite for a viable system of public justice. It is in these requirements of the 'meeting of needs' that Sagovsky finds resources for more flexible interpretations of law, that do justice to Christian concern about the intrinsic value, the holiness of the individual, shaped by and inescapably living within community, by using 'judgment', the personal discernment and adaptive interpretation of the law, which does better justice to 'justice' than legalistic accuracy.

The book concludes with a passionate exposition of the function of the Eucharist to create, maintain and convey a communion which engenders and maintains a spiritually based morality of love capable of guiding us to the (re)creation of full participatory citizenship. Upon the current desertification of public civic and political space, this book is a welcome and generous shower... 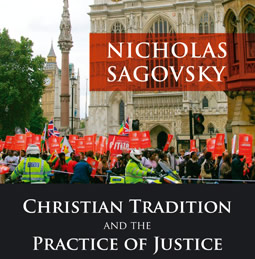