All links are to external websites:

CAFOD is the official development agency of the Catholic Church in England and Wales. CAFOD is a major British charity that has been fighting third world poverty since 1962. CAFOD believes that all human beings have a right to dignity and respect, and that the world's resources are a gift to be shared equally by all men and women, whatever their race, nationality or religion.

CAFOD's current focus in China is in supporting China Social Services Centres in their HIV/AIDS work.

The Bishops' Conference of England and Wales is the permanent assembly of Catholic bishops in these two countries. It is an expression of the collegiality of the bishops.  Through it they proclaim the Gospel to the people of England and Wales. Bishops have visited China and Hong Kong and received Catholic and ecumenical visits from China.

The Catholic Missionary Union is a forum bringing together missionary interests and activities from the Catholic Church in Britain. It constitutes a consultative body for the Catholic Bishops' Conference and brings together representatives from over 30 missionary orders and movements.

Christian Aid is an agency of the churches in the UK and Ireland. Christian Aid works wherever the need is greatest, irrespective of race or religion. Today it works in over 60 of the world's poorest countries. It supports local organisations, which are best placed to understand local needs. Christian Aid works with two partners in China, including Amity. In a partnership of more than a decade, they have concentrated on rural development, core funding and staff training.

The Church in Wales sees itself as the direct successor of the ancient Celtic Church and retains much of its character, especially as it defends the use of the Welsh language. It is represented on the forum through its Council for Mission and Ministry and has taken part in delegations to China.

The Church Missionary Society is an evangelistic mission agency working to see a world transformed through the love of Jesus Christ. Founded in 1799, it now works in over fifty countries and is particularly partnering with new mission movements in Africa and Asia.

The Cultural Exchange with China is a voluntary organisation within the worldwide Catholic tradition to promote understanding, cooperation and mutually beneficial friendships between the people of Britain and China. It brings together various individuals from a variety of mission organisations that are particularly interested in China.

Working in partnership worldwide, Feed the Minds fund a wide variety of innovative, indigenous educational projects. In China, they have made particular donations to broaden the breadth and depth of teaching programmes at a number of theological schools and colleges.

Friends of the Church in China

The Friends of the Church in China was established in 1984 as an ecumenical group seeking to promote growth, friendship and mutual understanding between Christians in Britain and Ireland, and Christians in China. The FCC convenes several meetings a year to share news and developments from China, and to enable Chinese Christians to address their counterparts in Britain and Ireland. FCC has supported a number of grassroots programmes in China including a rural orphans programme, and encourages members to engage personally with China through partnerships like the Summer English Programme.

One of the Methodist Church's aims is to ‘live the gospel in all its fullness for the wellbeing of the people wherever we are, and to fulfil the great commandment of Jesus to love our neighbours as ourselves.' The Methodist Church works internationally through its World Church Office and has a longstanding relationship with China.

The PCW brings together over 700 churches throughout Wales, as well as linking them with churches abroad. Their aim is to worship God and spread the gospel of the Lord Jesus Christ. PCW members have a long history of working with Chinese Christians.

The PCI serves the whole of the island of Ireland. It brings together  over 560 churches. The  PCI's form of Christian faith is "best described as 'Reformed' with its strong emphasis on the Sovereignty of God, the Kingship of Christ and the authority of the Bible." The PCI hold a place as observers at the China Forum.

QPSW works for peace and justice through removing the causes of conflicts and increasing the understanding between peoples. British Quakers have cooperated in university-level education in Sichuan for over a century and are strongly involved with the Friends of the Church in China.

The Scottish Churches' China Group (SCCG) is an independent charity supported by both Catholic and Protestant churches in Scotland. It has a long history of working in Liaoning and Yunnan provinces, particularly in the medical field. In recent years, it has co-ordinated training programmes for medical personnel from Chinese hospitals as well as for Catholic sisters.

Society for the Propagation of Christian Knowledge

SPCK is the oldest Anglican mission agency. Founded in 1698 it works with Christians of all denominations to help people grow in the Christian faith. The society promotes Christian literature and communication projects through SPCK Worldwide. Each year it makes grants and gives advice to some 200 projects in over 60 different countries. SPCK has given considerable grants to theological colleges in China to improve the breadth and depth of their teaching programmes.

The United Reformed Church is a union of Presbyterian-Congregational churches, strongly committed to the Reformed tradition and to the unity of all God's people. It focuses its work in China through supporting Amity teaching in China. 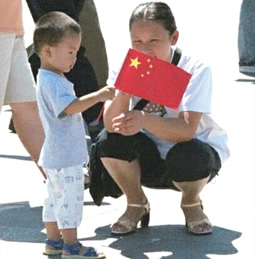