Christianity in
the Middle East

Middle East without Christians 'unthinkable' - Pope Francis
Pope Francis focused on the need for constant prayer and effective advocacy in favour of peace for Christians in the Middle East, at a formal meeting of Cardinals in the Vatican on 20 October. 'We cannot resign ourselves to thinking about the Middle East without Christians, who for two thousand years have confessed the name of Jesus', he said.
Catholic Church in England and Wales

Islamic State cannot be defeated by military action alone, say Church leaders
Leaders of the Baptist Union of Great Britain and the Methodist Church in Britain say that the case for military intervention can only be supported as one part of a broader political and economic strategy to tackle the ideology of IS. The churches have issued a briefing on the issues

and are urging their members to pray and to write to their MPs asking the Government to offer greater support to refugees from Syria and Iraq as part of such a strategy.
Methodist Church in Britain

Bishop Angaelos calls for collaboration on Middle East religious freedom
Bishop Angaelos, General Bishop of the Coptic Orthodox Church in the United Kingdom, and also moderator of Churches Together in Britain and Ireland, has called for collaboration to address violations of international religious freedom in Iraq, Syria and the wider Middle East.
More

Middle East Church leaders meet to discuss plight of Christians in Iraq
At an ecumenical gathering, hosted by the Archbishop of Canterbury and initiated by His Grace Bishop Angaelos, a joint statement was issued expressing solidarity with, and advocating for, all those who continue to suffer gross violations of the fundamental right and freedom to practice their chosen faith in Iraq, Syria and the wider Middle East.
Catholic Church in England and Wales

Bishop Angaelos BBC TV interview about crisis for Christians in Middle East
Bishop Angaelos, moderator of Churches Together in Britain and Ireland (CTBI) and General Bishop of the Coptic Orthodox Church in the United Kingdom, has given an extensive interview on BBC TV sharing his views on the crisis in the Middle East facing Christians.
More

Statement by Bishop Angaelos on Iraq, Syria and the Middle East
Bishop Angaelos calls for solidarity and assistance for those suffering, condemn acts of brutality, and says we need to explore every possible means of healing and restoring communities and lives.
Coptic Orthodox Church, UK

Pope Francis: Appeal for Iraqi Christians
Pope Francis has reiterated his prayerful concern and call for peace in Iraq.
Catholic Church in England and Wales 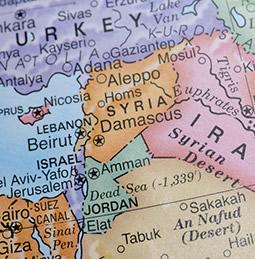 News and statements from churches and others on the crisis in Syria.
More >>