10 September 2013
Archbishop Vincent Nichols urges caution over use of military in Syria
Archbishop Vincent Nichols, of the Catholic Church in England and Wales, spoke on the BBC Radio 4 'Sunday' Programme urging the international community to draw back from military intervention to address the civil war in Syria.
Catholic Church in England and Wales

4 September 2013
Pope renews appeal for peace in Syria and calls for fasting and prayer
Pope Francis has again called for peace in Syria inviting Christians of every denomination, believers of every religious tradition and all people of good will to take part in a worldwide fast and vigil of prayer and penance for peace on September 7th.
Vatican Radio

2 September 2013
Church leaders give thanks for UK rejection of military action in Syria
Leaders from the United Reformed Church, the Methodist Church in Britain and the Baptist Union of Great Britain have given thanks for the decision of the UK Parliament to reject military action in Syria. Prior to the vote, the Quakers in Britain had called for a non-violent response to the Syria crisis.
Baptist Union of Great Britain

29 August 2013
Archbishop of Canterbury's speech in the House of Lords on Syria
While acknowledging that that there is as much risk in inaction as there is in action, Justin Welby quotes 'Just War' theory saying that the step of opening fire is one that must only be taken when there is no possible alternative whatsoever, under any circumstances.
Archbishop of Canterbury website

28 June 2013
Increasing violence against religious communities in Syria alarming
Recent violence in Syria has once more shown that religious communities are being targeted and used as instruments of psychological warfare, political strategy or intimidation, says general secretary of the World Council of Churches (WCC), Rev. Dr Olav Fykse Tveit.
World Council of Churches

31 October 2012
Report - A Gathering for Syria
Sally Foster Fulton, Convener of the Church and Society Council of The Church of Scotland, reports back from the event at St Giles' Cathedral in Edinburgh.
Church of Scotland

24 October 2012
A Gathering for Syria
30th October 2012, St Giles Cathedral, Edinburgh, 6pm-7pm
A coming together of civic and faith communities: with music, readings and reflections to express shared support and hope for the people of Syria. This event is hosted by the Church of Scotland and supported by Edinburgh Inter-Faith Association and City of Edinburgh Council.

18 October 2012
Pope to send Delegation to Syria
Pope Benedict XVI will be sending a delegation to Syria to express "fraternal solidarity with the entire population".
Catholic Bishop's Conference of England and Wales 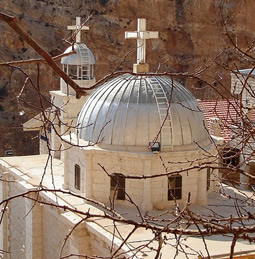