Churches and aid agencies are playing a key role in addressing the current Ebola outbreak in West Africa. Since March, it is estimated that there have been approaching 7,000 deaths, with millions now at risk.

Efforts are on-going to co-ordinate the work of churches, ecumenical organisations and UN agencies in their response to the crisis. Here we outline some of the Christian organisations involved and report on their progress.

The WCC is producing a regular Ecumenical Ebola Response newsletter to bring updates from the various meetings organised by the World Council of Churches.

The third edition was published on 27 February 2015. The world is making progress in the fight against Ebola and the valuable role churches and faith communities play in addressing the current Ebola outbreak in West Africa through their role in health services has been noted by a key World Health Organization (WHO) representative.

Christian Aid describes the situation as desperate with West Africa gripped by panic. It has launched a crisis appeal to help halt the spread of Ebola and fund its partners on the ground who are working to protect people from the virus. As of November 2014, Christian Aid said it had reached 1.2 million people with life-saving advice on how to avoid contracting Ebola and given out 200,000 pairs of disposable gloves and 360kg of powdered chlorine for health centres and medical teams.

Christian Aid also has a page of prayers and prayer points for all those affected by the Ebola crisis, plus a Powerpoint presentation for use in church or groups.

Prayers for the Ebola Crisis Appeal 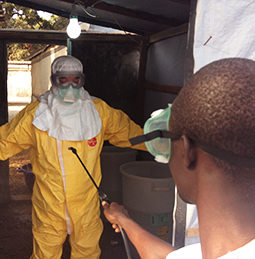