Dreams of the ‘Beloved Community'

8 September 2013 or any Sunday during the year

August 2013 marks the 50th anniversary of Dr Martin Luther King Jr's monumental ‘I have a dream' speech which spoke about all God's people living in freedom and peace in a world governed by truth and justice.

Dr King joined over 250,000 of his fellow Americans that day in Washington to commemorate the centenary of President Abraham Lincoln's 'Emancipation Proclamation' to free African-Americans. Lincoln, who was the USA's 16th President, is often known as the Great Emancipator for his historic act.

Dr King was in Washington to argue that the freedoms promised by President Lincoln to the newly-emancipated African-Americans never really materialised, and the March on Washington was an attempt to encourage all Americans to re-commit themselves to the Emancipation Proclamation's original promise. Dr King's speech still remains an inspirational call for us to work for an equitable world.

Our resource pack for 2013 offers a service for all ages together, with a range of ideas and activities around the theme of dreams, visions and the ‘Beloved Community'

There is also a link to the text of the speech - click on
'I Have a Dream, Address at March on Washington for Jobs and Freedom' 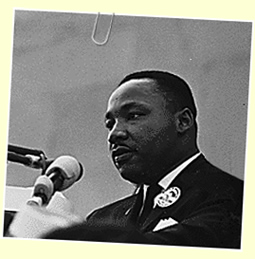