responding to the
chinese earthquake

(in Partnership with the Amity Foundation and Jinde Charities)

Friday May 30 2008
The China Christian Council (CCC) has appealed to all Christians in China to pray for their compatriots who are suffering and to share the love of Jesus through compassionate giving. As the disaster relief work continues they have appealed for additional funds.

Monday, May 26 2008
Many churches in Sichuan province have been destroyed or badly damaged by the earthquake. According to Rev. Wen Weikang, president of the Sichuan Christian Council (Protestant), members of the council have been working in the worst-hit counties to distribute relief goods and help churches and congregations where possible. Preliminary investigations suggest that the churches and meeting points in Beichuan county and Dujiangyan city have been particularly badly affected.

Sunday, May 25 2008
The Ministry of Social Welfare has released updated figures showing the number of people who have lost their lives has reached 60,560 with an additional 26,211 still missing. An Amity Social Workers' Team has spent several days in Mianzhu, where 6000 displaced people are being temporarily sheltered in a half-built stadium. The Team is conducting assessments, providing makeshift classes for children, and conducting counselling sessions with bereaved families. More tents are urgently required to shelter the displaced communities.

Saturday, May 24 2008
The day was dedicated by Pope Benedict XVI as a day of prayer for the church in China. He later told a crowd in St. Peter's square that he felt personally close to all those Chinese who are living through hours of anguish and tribulation following the earthquake, and urged brotherly solidarity with them.

Wednesday, May 21 2008
Bishop Joseph Li Liangui (Xianxian diocese) visited affected towns with Paul Han, vice director of Jinde Charities. Visitors from Caritas Germany, who have donated significant funds to the relief effort, were also taken to the area. Churches in Sichuan and neighbouring provinces have been providing emergency shelter, while several others have been severely damaged.

British and Irish Churches are standing alongside the Chinese people and the churches' partners through:

Please pray with the Chinese churches for the relief effort, for the army who are working as the first line of defence, for those who have lost or are searching for friends and family, for those made homeless, and for the churches themselves as they seek to minister to those in need. 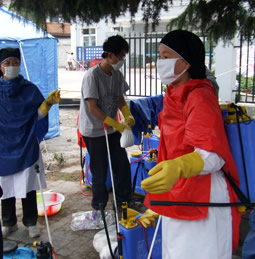