Hong Kong's Occupy Central is about a promise not kept

The pro-democracy movement in Hong Kong, Occupy Central, is a direct response to the government of China's decision to control the nomination process for the next Chief Executive of Hong Kong, who is to be elected in 2017.

The last four weeks have been momentous. On Tuesday 21st October there was a meeting held with the Chief Secretary and the student protestors but nothing concrete was achieved. At present there is a standoff.

On Monday 27th October, an interfaith group of six religious leaders offered to be bridges between the government and the protesters. The members of the group made what they believe was a simple offer in order to curb violence and to bridge the differences for the good of the city.

The offer was not taken up but it is clear that these leaders can potentially create a space for the differing groups to dialogue and come up with a way forward for democratic reform.

The decision of the Standing Committee of the Chinese National People's Congress taken on 31st August flies in the face of the Sino-British joint declaration that there would be universal suffrage by 2007. This promise was postponed until 2012 and subsequently rejected again, but promised for 2017.

That this assurance was given in 2012 and was perceived to be in line with the agreement of 1997, was not just welcomed but was held up as the goal for which nothing but universal suffrage would be tolerated.

Thus, the decision of 31st August was greeted with disbelief and the group of three (all Christians) who had been planning and advocating civil disobedience for 21 months should anything untoward happen, called for a protest to be held on 1st October, the National Day of the People's Republic of China.

However, there was a more immediate response by the students at the Chinese University of Hong Kong when they called for a boycott of classes from 22nd-26th September. This was overwhelmingly supported with some 10,000 students turning out for the inaugural rally.

On the last day of the boycott, a young man, Joshua Wong, also a Christian, climbed on to the roof of the headquarters of the HK Government and was arrested along with a number of other supporters.

This action brought about a very angry response and more than 50,000 people came out on the streets at the following midnight. More people joined the protests over the weekend and police began to use tear gas to disperse the crowds.

To protect themselves against the use of tear gas, many put umbrellas in front of themselves and almost immediately there were reporters, particularly from the West, who began to use the phrase, ‘Umbrella Revolution'.

However, while the word ‘umbrella' has gained popularity, Hong Kong people reject the word ‘revolution' because the intention of Occupy Central is not to overturn the government. The Umbrella movement is a simple protest; it is to reject the decision taken on the 31st August and to demand universal suffrage for the Chief Executive of HK in 2017.

There have been some careful and thoughtful statements from Church leaders and some have even been able to broadcast powerful messages calling for restraint in the face of violence and listening to one another.

Churches have opened their doors so that protesters can find not only a place to rest and refreshment but also attend prayer vigils. In Wan Chai, the Methodist church has been open continuously since 28th September.

As might be expected, there has been criticism that Christians have been at the forefront of supporting the protests. Also, there is divided opinions within the Christian community.

The comment from the Revd Yuen Tin-yau, Chair of the Hong Kong Christian Council and President of the Methodist Church, is pertinent: "In politics there is no neutrality, to say you have no opinion is to have an opinion, and more often than not, having no opinion would be taken as support and leverage for the ruling group ... Equality and justice are core teachings in Christianity and for that reason, Christians tend to support democratic development."

Christine Elliott is Director for World Church Programmes
at Churches Together in Britain and Ireland. 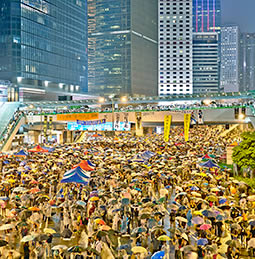