You can read the report below or download as a PDF:

The international partners of NCCSL divided into two groups, one travelling north to Jaffna (which now requires a permit from the Ministry of Defence) and one to Batticaloa in the east. I was part of the group that travelled north to Jaffna where we met with a variety of people from all walks of life and from every faith group represented in the region. On the day we met with the various faith leaders, we were accompanied by journalists from the local TV and radio as they recorded our conversations and reported on our meetings. It is clear that there are very good relationships between the faith groups in the north and that their leaders endeavour to work co-operatively wherever they can. However, there remain tensions as the return to peaceful co-existence is not as easy as one would long for, and over perceptions around who will be rehoused first.

The effects of the war were felt most keenly in the north with many families, especially fisher folk, moved to camps far from the coast. In addition the area was hit by the tsunami ten years ago, but its effects persist. Some people are only now returning to their land and rebuilding, some returned only to be driven out again or wounded in the final horrific stages of the war. We visited two refugee camps which were clearly meant to be very short term fixes but which have been in existence for 25 years. The conditions are poor and the energy levels of the residents is low.

All the Church traditions are working at responding to the lack of services in the (mainly Tamil) rural areas in the region by offering medical and educational services. In many places there are plans to develop church land for income-generating crops but funds are lacking. We met with church leaders in one of the more rural churches in the region and where it was safe for them to voice some frank criticism of the government and its perceived lack of concern or any justice for the predominantly Tamil north. The frustration and anger was palpable.

One of the programmes we visited, Navajeevanam, is a recovered plot of land - 31 acres - where they are endeavouring to farm the land organically and build up a Christian community again. Rev Nishanta Gunaratnam, of the Methodist Church, is a man with a vision and a deep desire to be part of the community. The farm is doing well and several of the 31 acres have been planted with organic rice. Negotiations are at an advanced stage to grow organic chillies commercially but there is a need for a commercial manager to supplement the direction given by Nishanta, who also speaks and advises in other parts of the church on these issues. On the plot of land there is a church which was all but destroyed in the war, only the altar wall remained and it became known as the ‘church without walls' and where for some time worship was held on a regular basis. It now has three new walls and a roof! There is a pre-school group running, vegetables are being grown to feed the workers and groups of volunteers have visited (and after each visit they receive another visit from the police!).

In Colombo I attended a meeting of the partners of NCCSL, reviewing the progress of the work plan and assessing future priorities and needs. The presence of CTBI was perceived as a sign of a new partnership between councils of churches and is deeply appreciated. NCCSL has embarked on a vital and creative healing of memories programme, working especially with ex-combatants in the east. They have been working with the programme developed by Michael Lapsley a South African minister. The post-conflict work is impressive but one cannot but be daunted by the scale of the task in the face of the government's preference for repression and intimidation rather than dialogue and community peace building.

Other highlights of the work include volunteer teachers in schools, livelihood training, radio and TV, interfaith, work with abused women and children and trauma counselling. Specific requests for help included an expert in trauma counselling to do some training and a mission partner/volunteer to take a role supporting the General Secretary and liaising with partners.

We discussed the importance of working with the Sri Lankan diaspora where there is a large potential for supporting the work of NCCSL as well as for having a positive or negative influence on the political situation. At this meeting there was a sizeable group from Australia which included Sri Lankan members some of whom had had to flee SL at the height of the troubles.

There followed, immediately after, a two day consultation entitled ‘Moving beyond Conflict'. There were representatives from all over the world (Latin America, Africa, Asia, Europe and Australia) and it drew lessons about the essential nature of ecumenism for the Christian Church even though its current defensive approach leads it away from this necessity, as well as various dimensions of the huge and fragile task of peace and reconciliation in Sri Lanka.

The formal celebrations for the centenary included a concert in the very grandest auditorium in Colombo attended in part by the state president. Later we processed through the streets - complete with band - to a wonderful three-hour service in Colombo Cathedral where there were many greetings given and a wonderfully inspiring sermon by Archbishop Roger Herft, metropolitan bishop of Western Australia (but Sri Lankan born). We were a congregation of well over a thousand people and which included contributions from all denominations including children, young adults and differently abled people.

The theme of peace and reconciliation is important in so many places around the world and Christians recognise the need to be peace makers, building societies of justice and hope. The role of Christians in this particular setting in Sri Lanka is key as they cross ethnic divides, but all people of faith are called to this task, and we have been asked to join them in this. And so we do through prayer and active participation where and when we can. 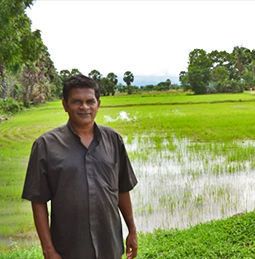