The Crisis in Syria

We are all watching the unfolding crisis in Syria with concern and alarm. As with other situations, particularly in Egypt and Libya, we are acutely aware of the human cost of what happens when old regimes that have held power for so long are challenged.

As Christians the land of Syria is deeply embedded in the story of our faith - Damascus is associated with the conversion of Paul and many of the first Christian communities where established there.

The Christian community in Syria is one of the oldest in the world and this and its location in the heart of the Middle East means that is as important to Christians as Israel and Palestine.

On this page we will be listing some of the recent statements from churches and other bodies that might be helpful in your prayers. We will also list here any action that is suggested.

7 March 2014
Church of England and aid agencies join global #WithSyria campaign
#WithSyria, a global coalition urging world leaders to end the violence and suffering of millions of Syrians, is supported by the Church of England, Christian Aid, CAFOD, Tearfund, World Vision and many other organisations.
Anglican Communion News Service

15 January 2014
Bishop for Migrants appeals to UK government to receive refugees
In a homily to mark the World Day for Migrants and Refugees, Bishop Patrick Lynch calls on the UK Government, in conjunction with other European Governments, to "find a way in which countries within the EU can receive at least some of the refugees" from the civil war in Syria.
Catholic Church in England and Wales

International Affairs page with links to statements on Syria

4 September 2012
Statement on crisis in Syria 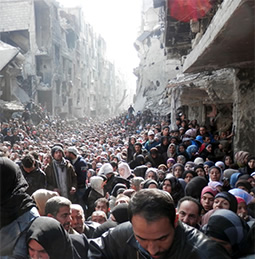 Help those who are suffering hardship in the Philippines, Syria, India and elsewhere with prayers and financial support
More >>