Archive of the daily video webstream

Some of the prceedings were posted on the blog

The Conference of European Churches (CEC) 14th Assembly was inspired by Acts 22:14-16 which refers to witness, a sense of urgency and mission, and the challenges of a changing Europe. The assembly looked at the future of CEC itself and a major outcome was the renewal of the organisation's constitution.

"At a time when the decline in religious practice leads to the closing of churches and the restructuring of parishes and communities, at a time when the ecumenical movement's weaknesses are beginning to show, one might think that CEC does not have much of a future in our society or, if it does, that that future is impossible to predict and that, in these conditions, we must content ourselves with passively biding our time.

"Not passively biding our time is precisely what the CEC revision working group proposes in its report to the 2013 Assembly. The report invites us to analyse all the available facts on demography, the evolution of practices, social changes and the situation of religious communities. Reading this report, we find ourselves confronted with a very biblical question: 'And now what are you waiting for?'", says CEC General Secretary, Rev. Dr Guy Liagre.

The assembly focused on reform measures as well as constitutional, legal and decision-making aspects. The revision proposal included a common purpose, vision and strategic goals as well as a possible structure which would serve these goals.

Up to 300 member church representatives attended as official delegates, together with representatives from CEC Associated Organisations, guests, consultants, young stewards and staff, bringing the total to around 450.

You can download documents relating to the assembly including the new constitution, composition of the new governing board and CEC's strategic roadmap 2013-2017.
CEC Assembly 2013 documents

See the 14th Assembly of the Conference of European Churches website 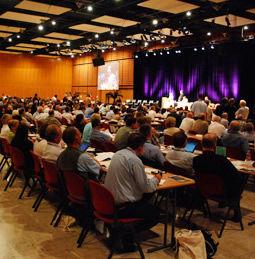