Some 120 members of churches from all over Britain gathered at the Carrs lane URC Church Conference centre in Birmingham to meet, hear experts, and exchange their experiences and project news. Church members, refugees, asylum seekers, experts and NGO workers were welcomed by CRN Chair Michael Bartlett, and encouraged in their work by Bishop Gordon Mursell of Birmingham.

Douglas Board, Chair of Trustees of the Refugee Council, outlined his views on the cooperation between churches and NGOs. Birmingham expert solicitor Sean McLoughlin provided an update on the current legal position of asylum law and practice in Britain.

Ifath Nawaz, co-chair of the Independent Asylum Commission who also heads the UK Muslim Lawyers Association, talked of her experience of the Commission over the last year, having travelled around Britain to take evidence on all aspects of asylum. She described the ample and detailed information and views obtained from many witnesses: statutory, judicial, politicians, advocacy professionals, asylum-seekers themselves, doctors and academics. She also outlined where Britain's practices need to become more humane and more compliant with international refugee obligations. She also talked of possible improvements.

The IAC's recommendations for improved practice in virtually every aspect of asylum will be launched soon. 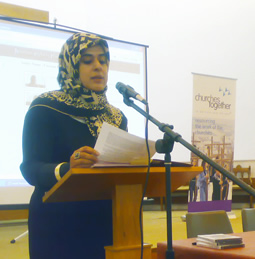