47While he was still speaking, Judas, one of the twelve, arrived; with him was a large crowd with swords and clubs, from the chief priests and the elders of the people. 48 Now the betrayer had given them a sign, saying, ‘The one I will kiss is the man; arrest him.' 49At once he came up to Jesus and said, ‘Greetings, Rabbi!' and kissed him. 50Jesus said to him, ‘Friend, do what you are here to do.' Then they came and laid hands on Jesus and arrested him. 51Suddenly, one of those with Jesus put his hand on his sword, drew it, and struck the slave of the high priest, cutting off his ear. 52Then Jesus said to him, ‘Put your sword back into its place; for all who take the sword will perish by the sword. 53Do you think that I cannot appeal to my Father, and he will at once send me more than twelve legions of angels? 54But how then would the scriptures be fulfilled, which say it must happen in this way?' 55At that hour Jesus said to the crowds, ‘Have you come out with swords and clubs to arrest me as though I were a bandit? Day after day I sat in the temple teaching, and you did not arrest me. 56But all this has taken place, so that the scriptures of the prophets may be fulfilled.' Then all the disciples deserted him and fled.

3 When Judas, his betrayer, saw that Jesus was condemned, he repented and brought back the thirty pieces of silver to the chief priests and the elders. 4He said, 'I have sinned by betraying innocent blood.' But they said, 'What is that to us? See to it yourself.' 5Throwing down the pieces of silver in the temple, he departed; and he went and hanged himself. 6But the chief priests, taking the pieces of silver, said, 'It is not lawful to put them into the treasury, since they are blood money.' 7After conferring together, they used them to buy the potter's field as a place to bury foreigners. 8For this reason that field has been called the Field of Blood to this day. 9Then was fulfilled what had been spoken through the prophet Jeremiah, 'And they took the thirty pieces of silver, the price of the one on whom a price had been set, on whom some of the people of Israel had set a price, 10and they gave them for the potter's field, as the Lord commanded me.'

In a famous painting by Giotto of the arrest of Jesus, Jesus and the 11 disciples are depicted with halos whilst Judas (without halo) is donned in a yellow robe. The yellow is often interpreted to symbolise cowardice.

Judas makes us uncomfortable. Classically he is the betrayer, the coward, the ungodly, the one who lets the side down. Yet he fascinates us. Can it be that we see something of ourselves - something of human nature - in his actions? Is this why so often we seek to explain his actions? Judas finds himself on the edge of Jesus' pain in a way that is too hard to bear.

The person of Judas has had an almost folk-lore status. We still refer to a person who betrays others as a "Judas". Throughout the centuries Judas has been seen as the embodiment of evil. In more sinister times the person of Judas has been cast as the wicked Jew who led Jesus to his suffering and death. Renditions in art of the arrest in the garden have sometimes depicted an obviously Jewish Judas kissing a very European, white, blond Jesus. The manner in which the person of Judas has been distorted in anti-Semitic polemic is not something that can be ignored or forgotten and it gives us a warning not to use scripture as a means of waging war on vulnerable minorities.

A straightforward reading of the story suggests that Judas was motivated by his own greed but was overcome with remorse.

More recently there have been attempts to ‘explain' Judas' motives in betraying Jesus. Many have preferred to see Judas as the disciple who wanted to precipitate the kingship of Jesus, hoping that his arrest would lead to a popular uprising. Those who take this point of view have drawn attention to the possibility that 30 pieces of silver was a fairly small sum of money. If this interpretation is followed then Judas is the loyal, but misguided, disciple.

I made the wrong choice. Ok, ok, I thought I was doing the right thing. I wanted to refl ect your light, project you into power. I misunderstood. Is there forgiveness for me, even me..?

Mine was an emptiness seeking security. I found it in the Lord. In Jesus I found liberation and a way to reach for a new beginning, a new way of being...

Now I am manipulated and in misery...

My own fragility and need has led me to the place of death and my dreams lie in shattered pieces, shards at my feet.

I made the wrong choice. Ok, ok, I thought I was doing the right thing. I wanted to reflect your light, project you into power. I misunderstood. Is there forgiveness for me, even me..?

Mine was an emptiness seeking security. I found it in the Lord. In Jesus I found liberation and a way to reach for a new beginning, a new way of being...

Now I am manipulated and in misery...

My own fragility and need has led me to the place of death and my dreams lie in shattered pieces, shards at my feet.

We were told that old and broken people can still dream dreams, that the lame might walk, the blind see, the deaf hear.

Now I am hopeless and hirpled†, without sight and sound. I am inoculated from sensation. I seek sedation of conscience. There are so many like me...

I wanted to do well and meant for the best. I didn't understand...
I was full of anxious imaginings and ominous fears.
Now I am stumbling and grasping, a bye word for cheating and desertion.

And yet... was I called... was this my vocation... to be this... was it necessary?
My heart is being squeezed and I have no words.
If I didn't love the Lord so much, why do I feel such pain and desolation, such separation?

I smell of corruption and death, it clings to me and is unshakeable, shrinking my soul into nothingness.

† ‘Hirple' - Scots word, derived from Old Norse, meaning "to limp, walk with a limp". In Old Norse - "to suffer from cramp"

How do you interpret the motives of Judas? Do you feel any sense of empathy with him? 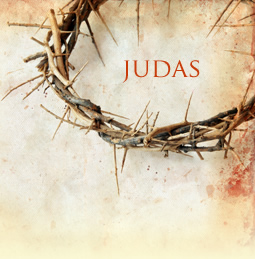