15 Now at the festival the governor was accustomed to release a prisoner for the crowd, anyone whom they wanted. 16At that time they had a notorious prisoner, called Jesus Barabbas. 17So after they had gathered, Pilate said to them, ‘Whom do you want me to release for you, Jesus Barabbas or Jesus who is called the Messiah?' 18For he realized that it was out of jealousy that they had handed him over. 19While he was sitting on the judgement seat, his wife sent word to him, ‘Have nothing to do with that innocent man, for today I have suffered a great deal because of a dream about him.' 20Now the chief priests and the elders persuaded the crowds to ask for Barabbas and to have Jesus killed. 21The governor again said to them, ‘Which of the two do you want me to release for you?' And they said, ‘Barabbas.' 22Pilate said to them, ‘Then what should I do with Jesus who is called the Messiah?' All of them said, ‘Let him be crucified!' 23Then he asked, ‘Why, what evil has he done?' But they shouted all the more, ‘Let him be crucified!

Matthew 27:24-26
Pilate Hands Jesus over to Be Crucified

24 So when Pilate saw that he could do nothing, but rather that a riot was beginning, he took some water and washed his hands before the crowd, saying, ‘I am innocent of this man's blood; see to it yourselves.' 25Then the people as a whole answered, ‘His blood be on us and on our children!' 26So he released Barabbas for them; and after flogging Jesus, he handed him over to be crucified.'

This week's title is "daylight robber" but is this describing Barrabas or someone else? Jesus Barrabas we know to be a robber or a bandit. Some writers have suggested he might have been a terrorist or a serial murderer. So we know where this character stands ethically. But if we reflect a little deeper we realise that Barrabas is not the one who commits the robbery on this day. On this day Barrabas is merely a man on the edge of Jesus' pain - what is more he benefi ts from it! The real robbers are the crowd! It is the crowd who steal justice, who rob Jesus of his life and whose theft takes us to the darkness of Golgotha.

In his commentary on Matthew's Gospel, Stanley Hauerwas refers to the fickleness of public opinion, and that whilst Jesus always shows love to all people - even the crowd - his call is to leave the crowd behind and follow him.

I had to get out of there sharpish. I thought they had me that time. Most of them think I'm a brute. I care, no doubt about that, but I care mostly about myself. Dog eat dog eh.... no place to be getting starry eyed, if you win you win, if you lose you lose. He lost. Tough luck.

Ok, so I was guilty and he was innocent, at least that's what they all said. But suppose we all took up this idea that we had to be fair, had to "love your neighbour". Unrealistic really. All these religious people were manipulating me as much as him. They were the ones doing the shouting, it's not me to blame. These religious types all say one thing and do another. Preaching one thing and doing the opposite behind the scenes. Yeah, they make agreements and break them, next time I won't be so lucky.

But this Jesus, he seemed different, I've never come across someone like him before. Before they grabbed me from the inn, I had heard about this Jesus. Great prophet they said, new Messiah they said. I don't know about all that stuff, but even standing next to him, being released, hearing them shouting, I felt something different. Can't explain it really, but he went in my place without a word. He didn't shout or make a big fuss, didn't even complain much.

I know it should have been me going down. Here I am getting all sorry and glassy eyed for Jesus when I was the lucky one. Makes you think though. Nothing's going to change because I feel a bit guilty. As long as I make money, get the bonus on the bets and deals I'm placing, setting up a few ‘contracts', why should anybody care? No real harm done, eh!

Except that Jesus was different. Any trouble I get I deserve, but not him. Do I feel guilty? Sure. He took my place, took the fall for me, got nailed.

I have to keep the hard man image going and don't want my crew to think I'm getting soft. Business is business. But deep down, in the middle of the night, when I have my own thoughts and even an odd prayer, I know he was good. I know who and what was right and wrong. Deep down.

Dear God
Sometimes it seems such a risk to pray
To know your still small voice
In everything
Overcome my doubt and release me
From myself
Make me aware of all that I have missed
Self seeking to overcome
Opportunities to serve
People to love
Give me courage to pray
And be changed forever. Amen 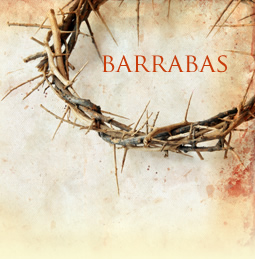