action on asylum and refugees

The Churches' Refugee Network aims to provide a collective and ecumenical voice on issues of asylum and immigration.

Here you'll find a range of resources that we hope will be helpful in your work. We'd also like to hear from you about your work, your concerns and your achievements.

For issues relating to migration, please see our Migration Theme which includes a page of Resources.

Refugees welcomed by 2015's first-time voters according to new research
Britain should keep its role of offering a safe place for people - especially children - fleeing violence, war and persecution, according to new research released for Refugee Week (June 16-22 2014). The research shows that eight out of ten (79%) of the new generation of first-time voters are proud of Britain's tradition of protecting refugees.
Refugee Week

Day of remembrance of persons who died at European borders - 22 June
A renewed call for churches 'to commemorate those who have died on their journey to find a dignified life in Europe through an annual day of prayer' has been made by the Assembly of the Conference of European Churches (CEC). This year the day recommended to hold services is 22 June, the Sunday after the International Refugee Day on 20 June. Material has been published for worship or intercessions during a service by the Churches' Commission for Migrants in Europe.
Conference of European Churches

Position paper from the CRN conference 2014
This position paper was agreed by the participants at the Churches Refugee Network conference at the Central URC in Sheffield on Saturday 5 April 2014. The participants came from a wide range of churches, ecumenically and geographically, from Bournemouth to Newcastle, Liverpool to Gravesend, with between them a wide knowledge of the issues facing people who seek sanctuary.
CRN position paper - 5 April 2014 (PDF)
Report from Baptist Times - Churches challenge Government on immigration

Latest newsletter from the Association of Visitors to Immigration Detainees

Groups working with migrants respond to Russell Brand
Representatives from Migrants Voice and Migrants Right Network are among those responding in The Guardian to Russell Brand's recent interview on Newsnight, saying that every disadvantaged and under-represented group should register and be ready to vote.
The Guardian

Legal challenge to ‘Go Home' vans pilot
Following a legal challenge to the ‘Go Home' vans pilot targeting illegal immigrants, the UK Government says it will consult local authorities and community groups before undertaking anything similar. The legal action was initiated by law firm Deighton Pierce Glynn on behalf of two clients of the Refugee and Migrant Forum of East London.
Equality and Diversity Forum (EDF)

UK government's campaign against illegal immigrants comes under fire
Concern has been expressed about recent Government initiatives against irregular immigration, including the 'Go Home' van campaign, in an open letter to The Guardian newspaper with more than 260 signatures, including academics, those in the legal profession and politicians. Writing separately, Nick Baines, Bishop of Bradford, has called it an 'unpleasant political campaign... It is a macho PR stunt that will achieve little, but cause real damage to language, culture and community.'
Open letter to The Guardian

APPG migration inquiry calls for Government review as families kept apart
'British citizens who are seeking to build a family with a non-EEA national - including from the USA and from Commonwealth countries such as Australia, Pakistan and India - are being prevented indefinitely from living
together in their own country', says the report. It also says that 'in many of the cases children, including very young children, had been separated from a parent, with potentially severe effects on their future development'.
All Party Parliamentary Group on Migration

Divided Families: All Party Parliamentary Group on Migration submission
Prof Kofman and Dr Wray of Middlesex University present demographic details that demonstrate new government rules on family migration make it much more difficult for spouses or children to join their UK based partner or parent.
More

London Legal Walk 2013 - Monday 20 May 2013
This walk supports law centres and legal advice agencies in London and the South East to help provide access to justice for all. Lead walkers include Lord Judge (the Lord Chief Justice), Lord Dyson (The Master of the Rolls), Lucy Scott-Moncrieff (The President of the Law Society), Maura McGowan QC (The Chairman of the Bar Council) and Keir Starmer QC (Director of Public Prosecutions).
The London Legal Walk

Scots urged to "be lights of hope in the lives of our neighbours"
In his Christmas message, Archbishop Philip Tartaglia, President of the Bishops' Conference of Scotland, refers to the plight of asylum seekers and urges "all those in positions of civil authority to ease the burden of suffering of these people, to allow them the basic human requirements of shelter and sustenance and to engage with them so that they might make their contribution to the common good".
Scottish Catholic Media Office

Government changes family migration rules
Migrants' Rights Network (MRN) is concerned that the new rules will prevent many thousands of people from exercising their right to a family life in the UK.
MRN briefing

All Change - Preventing Trafficking in the UK
Follow-up of a 2010 report by the Anti Trafficking Monitoring Group on the EU Convention on Action against Trafficking and on the (lack of) measures for prevention, protection and prosecution for trafficked victims in the UK.
More >>

Report: Children without a voice
Harrowing report looking at the psychological effects of asylum refusal on children in Sweden.
More >>

April 2011
Finding your life after losing it - the moving story of a refugee family
Sergei's story highlights the plight of many refugees and the work of CRN.
More >>

July 2010
'Zero notice' removals stopped
Fast-track deportation of failed asylum-seekers has been ruled unlawful by the High Court in a case initiated by Medical Justice. More >> 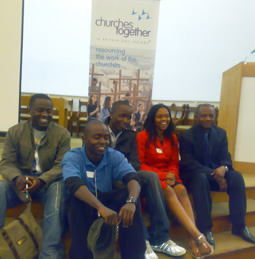