You are witnesses to these things

Churches around the world traditionally mark the Week of Prayer for Christian Unity from 18 to 25 January in the octave between the feasts of St. Peter and St. Paul, although some local contexts choose to celebrate it around the Feast of Pentecost.

The global organisers (the Pontifical Council for the Promotion of Christian Unity and the World Council of Churches) of the Week of Prayer for Christian Unity asked Scotland to host the week in 2010 to mark the centenary of the first world mission conference that met in Edinburgh. This gathering is traditionally seen as the beginning of the modern ecumenical movement, which seeks the visible unity of the world's divided churches.

Scottish churches are also involved in celebrations for the anniversary of the 1910 conference on the theme, "Witnessing to Christ today". Scotland therefore suggested as the theme for the Week of Prayer for Christian Unity 2010, "You are witnesses to these things" (Luke 24:48).

The Four Nations Writers Group has adapted the material written by the Scottish group and added some extra resources which are available in Welsh and English (an Irish version will appear in due course).

This year there are a number of differences:

The resources are available as free downloads from our resources page. This includes an order form to purchase the material in a published format.

Resources for Reconcile your People (2009) and Pray Without Ceasing (2008) are still available for download. 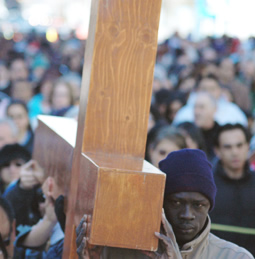