Discussion: ‘What sense can we make of the cross today?'

Topic for local radio: A personal story of coming through a crisis

Mount Hor (possibly Jebel Madurah) is some fifty miles to the south west of the Dead Sea. To the west of it lies the way to the Red Sea, through which the Israelites escaped many years before the time about which we now read. The biblical narrative suggests that Miriam died shortly before the Israelites reached Mount Hor and Aaron died at Mount Hor. Moses, finding no way forward, caused the Israelites to double back and make a huge detour to the east to avoid confrontation with the Edomites and the Moabites, before they turned west to cross the Jordan north of the Dead Sea. No wonder that the people complained, thinking they would die in the desert like Miriam and Aaron. Despite the miraculous provision of food and water (cf. Num 20:9-13), they grumble against God and against Moses. Then comes yet another trial: an infestation of poisonous snakes. The people regret their complaints and beg Moses to pray for the snakes to be taken away. Not for the first time, Moses is depicted as a powerful intercessor. He is told by God to make a serpent of bronze, place it on a pole. If someone was bitten by a snake, they could look to the serpent and they
would live.

The brazen serpent makes one more appearance in the Jewish Scriptures (2 Kings 18:4) where we are told that, as part of his religious reforms, King Hezekiah broke down the sacred pole and smashed the brazen serpent, now called Nehushtan, which had become an object of worship for the Israelites.New testament

In his encounter with Nicodemus, recounted in John 3:1-20, Jesus specifically alludes to the story of the bronze serpent, comparing himself with the serpent: ‘Just as Moses lifted up the serpent in the wilderness, so must the Son of Man be lifted up, that whoever believes in him may have eternal life' (3:14). He goes on to say that ‘God did not send the Son into the world to condemn the world, but in order that the world might be saved through him' (17). The suggestion is that those who look to the Son of Man when he is ‘lifted up' will be saved, just as the Israelites bitten by snakes were saved by looking at the brazen serpent. It is later made clear (12:32-33) that when Jesus speaks of being ‘lifted up', he is speaking about his death. His word for the human response that he seeks is that we should ‘believe' (16): ‘For God so loved the world that he gave his only Son, so that everyone who believes in him may not perish but may have eternal life.' To ‘believe' is, in this context, to trust that Jesus, even though he is ‘lifted up' in pain and humiliation, is the one who brings healing and salvation from sin. The Fourth Gospel speaks distinctively of the crucifixion as the moment of God's ‘glory'. As Jesus approaches his arrest and condemnation, he speaks the events that are to come in terms of God's ‘glory': ‘The hour has come for the Son of Man to be glorified. Very truly, I tell you, unless a grain of wheat falls into the earth and dies, it remains just a single grain; but if it dies it bears much fruit.' (12:23-4; cf. 17:1-5).

In the life of the church, snakes are associated with the ‘serpent' of Genesis 3, who personifies the temptation to disobey God. Given the widespread human fear of snakes, this is understandable, but deeply unfair to snakes. Snakes are feared because they may be poisonous; they bring the threat of death. There is, perhaps, in Jesus's comparison of himself with the ‘brazen serpent' the suggestion of his identification with poisonous evil - precisely for the purpose of healing. Like the brazen serpent, he assumes the form of evil, as a way of embracing the evil itself and bringing healing (cf. Phil 2:7-8). This is why Paul was determined to proclaim ‘Christ crucified' to the Corinthians. For Paul, the cross - where Jesus is ‘lifted up' as though he were a ‘danger to society' - is central to the gospel message that he brings (1 Cor 1:17). It was this ‘shock therapy', and this alone, that Paul believed could bring healing to the divided Corinthian church
(1 Cor 2:2).

The legend that Patrick banished all snakes from Ireland, driving them into the sea, reflects the association of snakes with temptation. The snakes were said to have interrupted his forty-day fast - which could be taken as a dramatization of the snakes tempting him to do evil. They were driven into the sea - perishing in the water like the Egyptians who pursued the Israelites into the Red Sea.

Questions you may wish to use in discussion

Lord God, who gave us Jesus to rescue us from all that poisons human lives and destroys human relationships, as we look to him, ‘lifted up' and suffering on the cross, may we find in him our health and our salvation, for his name's sake,
Amen 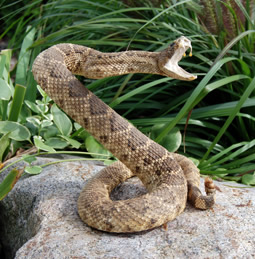