The Procession in the Streets of Jerusalem, James Tissot, Brooklyn Museum

Week 6 - Living in Hope of the Promise Land

Discussion: ‘Can dying be seen as arrival at the promised land?'

Topic for local radio: A personal story of coming close to death and a second chance

The vision of the promised land that is granted to Moses is a vision from the south-east. Moses looks across the river Jordan to the west. He looks not only into the land, but also into the future. He sees the land as it will be when the Israelites have taken Jericho, and have spread northwards to the east and west of the Jordan and filled all the land.

Moses' vision is one of completeness: the complete fulfilment of God's promise to Abraham, Isaac and Jacob (cf. Gen 12:1-3; 13:14-17; 17:8; 26:3-4; 35:12). Like Abraham, Isaac and Jacob, Moses does not see the fulfilment of the promise. Before he dies, he is able to look into the future: to see how the journey of faith through which he has led the Israelites for forty years will be completed.

At this point, he must leave that fulfilment to God. He must accept God's will for himself - which is that it is time for him to die - and for his people - that it is time for them to face the huge new challenge of entry into the land of Canaan. The leadership of the Israelites will now pass to Joshua. Moses's lifework is done. The Book of Deuteronomy ends by summing up Moses' unique place in the history of Israel: he is the one prophet whom, it is said, ‘the Lord knew face to face': the Lord spoke with him, ‘as a man speaks to a friend' (cf. Exod. 33:11).

In the long drawn-out conquest of the promised land, the moment when it could really be said the Israelites had established themselves was when they took over the city that became Jerusalem (1 Chron 11:4-9). This was the place where the tabernacle finally came to rest and was eventually replaced by Solomon's temple. Jerusalem (meaning ‘city of peace') was the place where God ‘made his name to dwell' (cf. Dt 12:10-11) and where the worship of the Israelites was centralised. It was also the place where the great kings of a united Israel - David and Solomon - had their residence.

The entry of Jesus into Jerusalem, riding on a donkey (a sign of peace), rather than on a warhorse must have evoked memories of the great king David, joyfully entering Jerusalem with the Ark of the Covenant (2 Sam 6:15) and so making it both a uniquely ‘holy' city and his own capital. Hundreds of years later, Jesus is seen as an unlikely king coming in peace to his capital city, to a rapturous popular welcome. Shortly after this, he will be crucified under a sign written in Hebrew, Latin and Greek (Jn 19:20; cf. Lk 23:38), so that all in Jerusalem may read these telling words, ‘Jesus of Nazareth, the King of the Jews.'

In Luke's Gospel, the greeting ‘Peace in heaven and glory in the highest heaven' evokes memories of the song sung by the heavenly host to welcome the birth of Jesus: ‘Glory to God in the highest heaven, and on earth peace among those whom he favours' (2:14). Jesus brings peace to Jerusalem (cf. 41), in a totally unexpected sense. When he enters the city like a king, the crowds cry out ‘Blessed is the king who comes in the name of the Lord! Peace in heaven, and glory in the highest heaven.' (19:38; cf. Ps 118:26). Yet the peace Jesus brings can only as yet be discerned in faith: by
looking into the future, to the establishment of the coming kingdom of God.

The imagery of the promised land and the imagery of Jerusalem captivated the imagination of Christian writers, even within the New Testament. The writer of the Epistle to the Hebrews traces the biblical narrative from the creation through to the conquest of the promised land: speaking of Abraham, Isaac and Jacob, he says: ‘these all died in faith without receiving the promise'; they were ‘seeking a homeland' ... ‘they desire a better country, that is a heavenly one.' (Hebr 11:13-16). What was true of the patriarchs was true of Moses (23-8) and of those who came after him. The ‘promised land' is, for Christians, a picture of heaven.

These ideas are reinforced by the idea that there is an earthly Jerusalem and a heavenly Jerusalem (Gal 4:25-6). The earthly Jerusalem reflects the glory of the heavenly Jerusalem. The Book of Revelation speaks of the ‘new Jerusalem' which is as beautiful ‘as a bride adorned for husband' (Rev 21:2). In the new Jerusalem ‘death will be no more; mourning and crying and pain will be no more' for the first things have passed away' (v.4). This is a vision of the hoped-for future kingdom of God, in which Jesus, who died like a sacrificial lamb to bring about reconciliation between humans and God, now reigns. In this ‘new Jerusalem' there is no temple because the earthly sacrifice of Jesus on the cross has ended all need for sacrifice: ‘I saw no temple in the city, for its temple is the Lord God the Almighty and the Lamb. And the city has no need of sun or moon to shine on it, for the glory of the Lord is its light, and its lamp is the lamb.' This is the city, which is now open to all who wish to enter. In the words made famous by Handel's Hallelujah Chorus: ‘The kingdom of the world has become the kingdom of our Lord and of his Christ, and he will reign for ever and ever' (Rev 11:15).

Questions you may wish to use in discussion

Lord God, who guided your covenant people through the wilderness to their promised land, bring us, we pray, to that place where we shall join in your praise and share your peace eternally, through Jesus Christ whose kingdom shall have no end and whose reign will be for ever and ever. Amen. 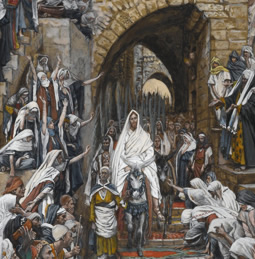