Catholic Social Services Centres have been established in a number of provinces including Hebei, Liaoning, Jilin and Shaanxi.

The oldest of the centres, the Beifang Jinde Catholic Social Service Centre, was created in Shijiazhuang, Hebei, in 1997. Originating out of the Catholic 'Faith Press' which reported on cases of social problems or individual distress, Beifang Jinde was established by Father John Baptist Zhang Shijiang. Its scope included disaster relief, care for the elderly and scholarships to gifted students from poor families.

Its increasing prominence was reflected in 2006 when it succeeded in gaining registration (as Jinde Charities) with China's Ministry for Civil Affairs. Jinde Charities has closely co-operated with the Amity Foundation in providing flood relief, responding to the destruction caused by typhoon Belis (2006) and in sponsoring two conferences related to social service issues.

In Shenyang, Father Zhang Kexiang established a CSSC in May 2004 following several visits to Catholic HIV/AIDS projects in Thailand. Co-operating with the local Centre for Disease Control, the Shenyang CSSC focussed on caring for people with HIV/AIDS. Since 2005, the centre has also begun work in rural communities, providing subsidies for education fees, vocational training for rural migrants, and constructing bridges and wells. 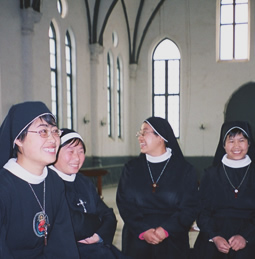