April 2014
Messy Church is 10 years old
Messy Church has celebrated it's tenth anniversary in the church where it first began in 2004.
Christian Today report

Messy Church is a way of being church for families, based around hospitality, creativity and celebration. It began in the UK in 2004, partly from a desire to help families with members of all ages grow together in their faith, and from a belief that we grow best as a church when we walk the journey with as many different people as possible.

It has since caught the imagination of churches of many denominations around the world as they try to rethink how to be church for people who have little or no church connection. It is a core ministry of the Bible Reading Fellowship (BRF) and is endorsed by Fresh Expressions which encourages new forms of church for a fast changing world.

Read this compilation of advice, reflections and experience from those who are running ecumenical Messy Churches. The report was produced at the end of 2011 by the BRF

These Messy Church sessions were originally put together for the Week of Prayer for Christian Unity which takes place in most areas from 18-25 January each year, but sometimes at another time of the year by local agreement. As they have a general theme of churches coming together these sessions can be used at any time of the year to encourage people to think about church unity. 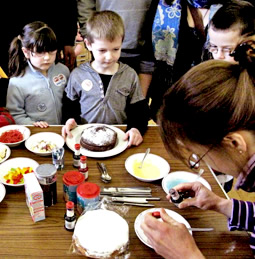