An Exploration of the Dynamic Relationship between Christian Ecumenism and Inter Religious Dialogue, its opportunities and challenges in the 21st Century

The Ecumenical Movement "Oikumene" refers both to the unity of all Christians and also of the reconciliation of the whole created order. Christians are called to pray for unity, and work so that the prayer of Jesus might be fulfilled "that they may be one".

However, with some of the enthusiasm for Christian unity dimmed and with some theologians speaking of "an ecumenical winter", there has been some suggestion that the ecumenical endeavour has moved on and inter religious dialogue has become the fresh urgency. This thinking, however, may be misplaced. Inter religious dialogue, far from replacing ecumenism, is in fact a dynamic expression of the ecumenical movement that seeks not only the unity of all Christians but the reconciliation of all creation to God.

This day conference explored this theme in greater depth and considered the following questions: 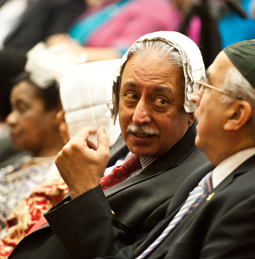